Time to announce the Golden Cloaca of 2015. Drumroll please:

Leading the way for the Sisters of Sin and Misery, our top layer was Summer, with a magnificent 197 eggs for the year. Yay Summer! This was despite flirting with the odd spell of broodiness, and never seeming to be super productive. (Deceptive, like her mother Holly.)

And as if to demonstrate just how much being broody can slow you down, second place went to Vivien with 168 eggs, and third place to Jeannie with 163. Given how often that pair were broody, (not to mention the fact that Jeannie almost died in winter, and then raised the Cloud chicks at the end of the year), their numbers are quite remarkable. Well done girls!

The full list, in order, is below. Something to note – Gabby and Saffy both started hiding their eggs in late spring. So their actual numbers are definitely higher, but as their cache was discovered by strimming the long grass, we can’t be sure who laid how many of the resulting mess. An extra dozen each is not impossible. (But since we couldn’t bring them in, they only count in the wistful sighing category.)

2076 eggs collected. 173 dozen. All things considered, not bad at all! (Except for Dorothy and Claire. Sigh …)

We lost Ella this morning. She died peacefully in her sleep, of old age. (Over eight years old, and very arthritic and tottery.)

She’d had a hard time through the previous winter – she no longer dust-bathed very well, so feather lice were a regular problem for her. We regularly used an old shaving brush and what always seemed like a pound of Diatomaceous Earth to dust her – turing her a very interesting grey colour, and doing something to deal with the lice. But it was an ongoing battle, and her moults were taking longer and longer, and she was spending more and more time just sitting in a sunny spot, not doing very much. (Until you appeared with food, in which case she became considerably more energetic.) And just the day before she died, we’d had a conversation about not making the poor old girl go through another winter. But Ella, as always, did things her way.

We were in bed still that morning when we heard a burst of what sounded like flapping. There was no accompanying squawking or cackling, so we didn’t worry about it. But when I went down to let everyone out of their houses, I found Ella dead in the Dower House. She was still warm, so we’re pretty sure what we heard were the muscle contractions that so often accompany a chook’s death.

We’ve buried Ella under a black mulberry tree in the paddock, just down from Holly. She had a good life, and a good death. I’m glad she died this way – at home, of old age, and without any illness or drama beforehand. Just popped her clogs on a sunny autumn morning. What better end could we ask for?

She’d recovered since her prolapse in August – laid 66 eggs, seemingly with no difficulty. But she didn’t ever get back to her old self, with some sort of neurological damage meaning that her bum did genuinely drag on the ground. We gave her antibiotics and metacam, but it made no difference. We had started asking each other whether we were doing the right thing keeping her going, but she didn’t seem to be in any pain, and was still enjoying life. We’d joked about making her some sort of sling, or a trolley of some kind. But she preempted us.

She’d gone in to lay her egg this morning, and when I went out to check on them all I saw her standing at the drinker. It took me a moment to realise that she was standing partly under the drinker. And it was another huge prolapse – every bit as bad as the first, even though it could only have happened within the last half hour or so at most.

We brought her in and washed her as best we could to get rid of the worst of the straw and dirt, and took her in to the vets. But from the moment we saw what had happened, I think we both knew that this needed to be the end. We couldn’t put her through all that again, just to go back to dragging herself around. Susan was, I think, quite relieved that we had already reached that decision. So we had her put to sleep.

We brought her home and buried her in the far end of the paddock, under a white mulberry sapling. Dear Holly. She was a thoroughly unique character, and we will miss her.

Well it’s another year been and gone, complete with drama, sadness, joy, silliness, eggs, chicks and squawking. We’ve had 1660 eggs laid over the course of the last twelve months, and been through both plenitude and dearth (and back again). To find out who won each month, do have a wander back through the old monthly summaries. There are bound to be surprises.

But with no further beating around the bush, it is time to announce the Golden Cloaca of 2014. Drumroll please (and apologies for the Y axis having a nervous breakdown, but it’s trying to span too great a distance): 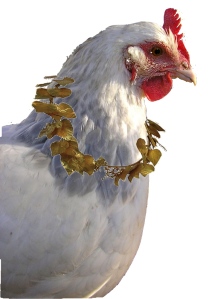 Yes, it’s Adelaide, for a triumphant Second Year in a Row, laying a deeply valued 149 eggs. Well done Miss Adelaide! She’s not the most impressive layer, but she just keeps going and going. (And, this year at least, not going broody.)

Second place, once again and still surprisingly, was Charlotte, with 141 eggs. Well done, again! Another hen who just goes about laying. (Although there definitely is fuss. She’s a Dorking, after all.)

Third place went to one of our newcomers. Despite only laying her first egg back in August (and therefore only having four months to accumulate her total in), Vivien managed an astonishing 130 eggs, including our longest-ever laying-streak of 42.

For those of you who are interested (and can’t be bothered going through the months individually), here are our egg totals for each of our girls for 2014:

So zero for Claire, 1 for Dorothy, and only 4 for Poppy. (You know it’s bad if you are out-laid by Ella!)

Ah, summer. And, as it happens, Summer:

Yes, Summer was the top layer for December 2014. Continuing to be quite impressive with 28 eggs for the month. Yay Summer! Adelaide took out second place with23 eggs, and Vivien was third with 22 (and a few days of pretending to be broody). Gabby was only one egg behind her on 21, but then we drop back to a mere 17 eggs apiece for our fifth place-getters (Imogen and Holly), 16 for our seventh place-getters (Rain and Freya),  followed by 15 each for Remy and Kai (=9th), 14 for Charlotte, (11th), 11 for Saffy (12th) and a mere 7 for May (13th place).

In other words, some are laying well; some are, well, laying; and some are ornamental. Sigh!